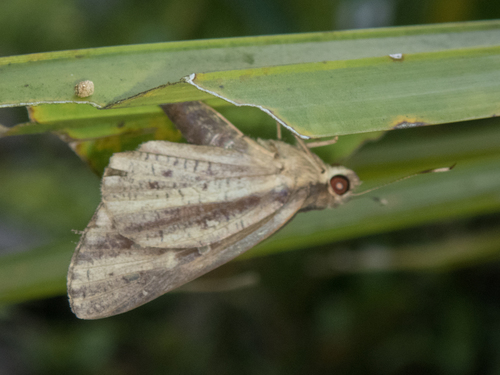 I saw 8 eggs, scattered about on the host plant, of which I collected 3. Each egg was approximately 1.7mm in diameter and looked like this. 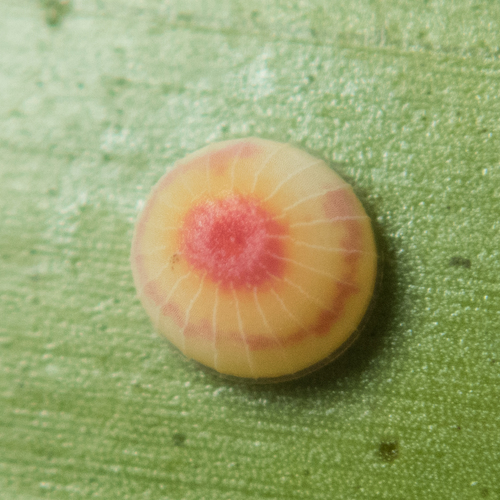 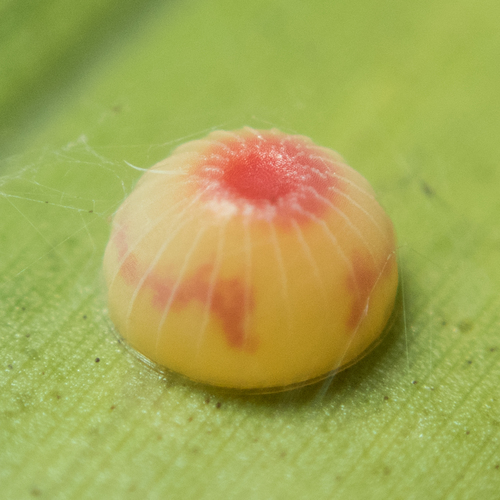 The photos were taken approximately 24 hours after oviposition. The following day, the eggs changed to a more uniformly pink colour. They hatched on day 4.

On the morning of day 5, the first instar larva was approximately 5 mm in length. It soon got to work making its first protective shelter in the leaf. 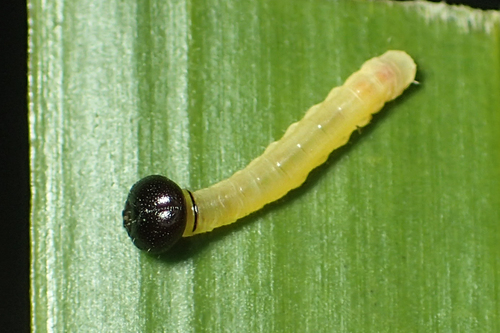 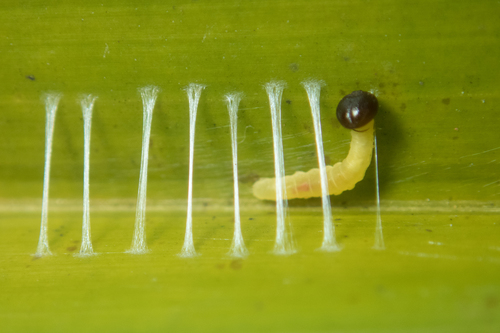 When measured on the evening of day 6, the larva had grown to approximately 8mm in length. On the morning of day 8, the larva was well into preparation for moutling, as seen by the large whitish lump behind the head, which had start to develop the night before. 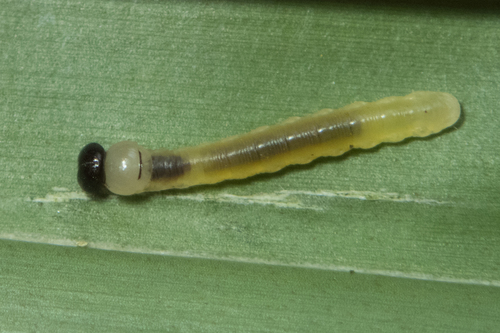 That evening, the moulting was complete. The second instar was very similar to the first but with a paler head, and there was no black dorsal line on the "neck". It was still approximately 8 mm long. 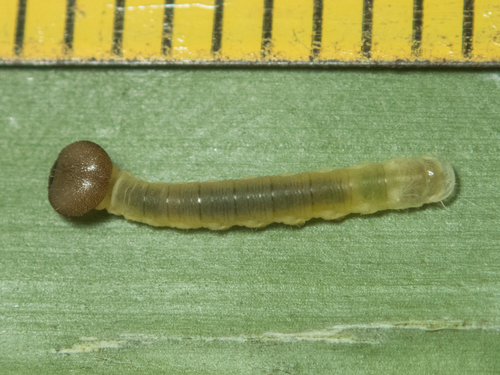 It grew to about 10 mm long by end of day 9 but, sadly, it died on day 10. I had collected 3 eggs: one never hatched, one hatched but never grew and died on day 8, and the third dies on day 10. So, I failed to get a complete life history.

Fortunately, at the same time as I collected eggs, I also found another caterpillar, which I also collected. At the time, I didn't know it but it turned out to be the penultimate instar, but on just. This photo, taken on the evening of collection, shows that it was already in preparation for moutling. 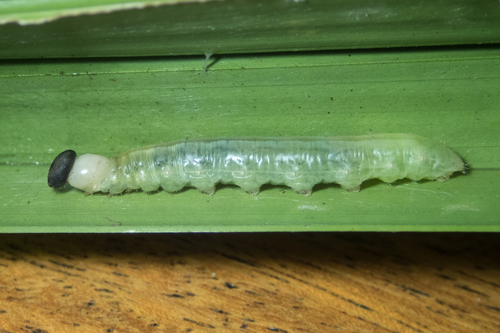 The following morning, moutling was complete and the final instar was revealed. At this stage it was approximately 38mm long. 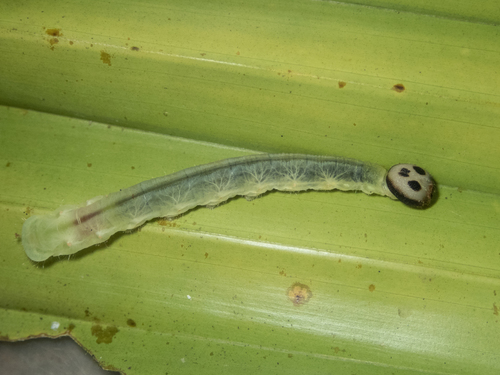 7 days later, the larva had grown to approximately 46mm long and turned a bit darker in colour. 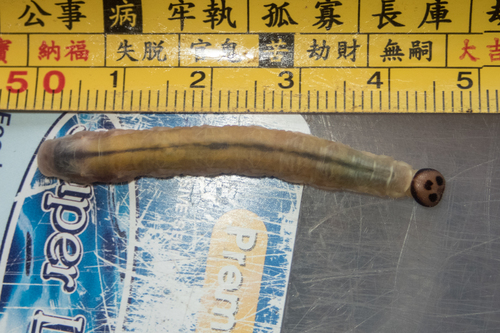 I had once previously, also observed a final instar larva in nature. It was in a feeding tube in its host plant, and munching away at the end of the tube. When alarmed, it dropped down into the tube and out of sight. This one was feeding less than 10m from my house. 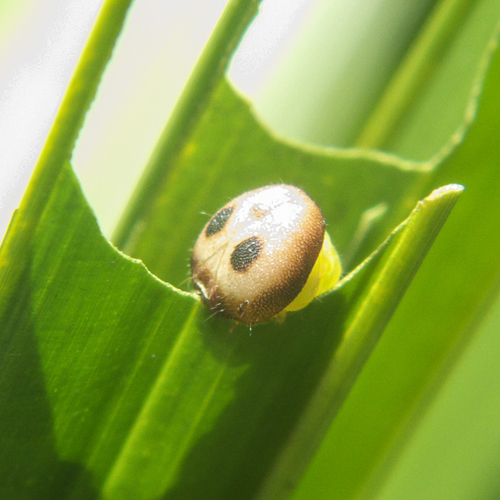 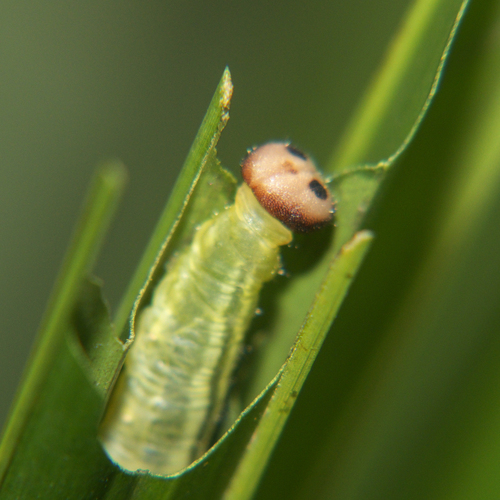 This one had slightly different markings on the head, with the central dark spot barely visible.

When first observed the pre-pupa was approximately 40mm long. It continued to shrink and produce more white powdered and was only 35mm when I last measured it. 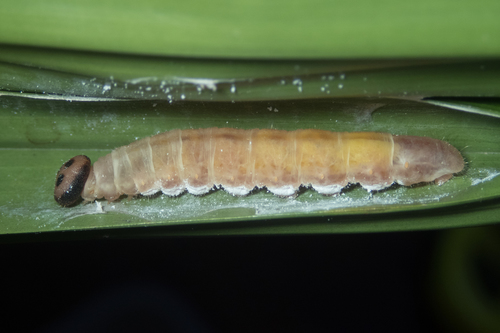 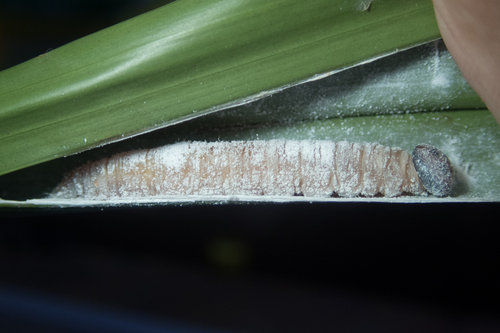 The following morning the pupa had formed. It was approximately 28mm long. 10 days later it darkened significantly. 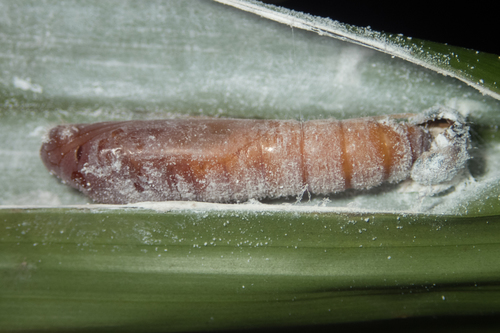 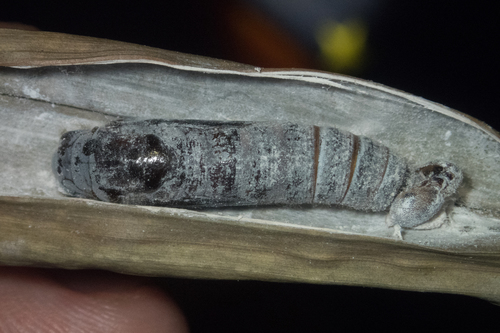 The total time from preparing for pupation to eclosure was 12 days, whereas it was 14 days for the larva I had previously collected.

The following morning the adult eclosed. I also managed to lose it without taking a photo. It flew out of the net "cage" I was keeping it in and flew out of the window. I rush outside to look for it but couldn't find it. A few hours late, I was very fortunate to find it perched on a stack of blue plastic chairs. 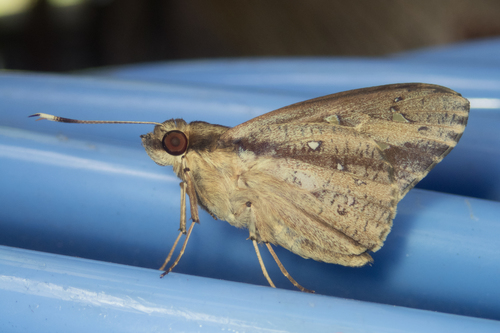 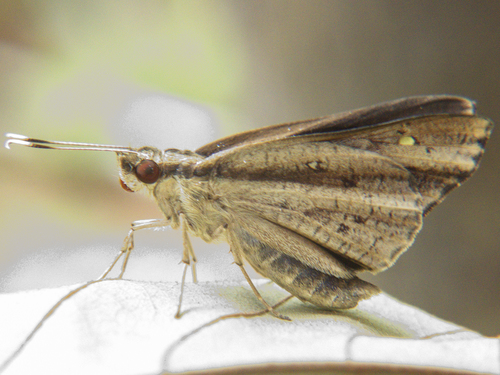 The second image is the adult that emerged from the final instar larva that I found previously in nature.

The first is a female and the second a male, which might explain the slight differences in the appearance of the larvae and lengths of pupation, but they could just be within normal variation and nothing to do with sex.

The host plant is a very common plant in the area Licuala spinosa (Mangrove Fan Palm). 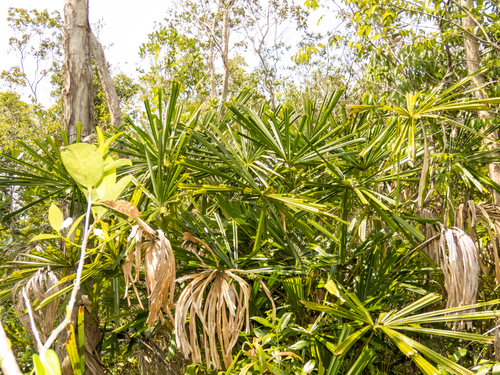 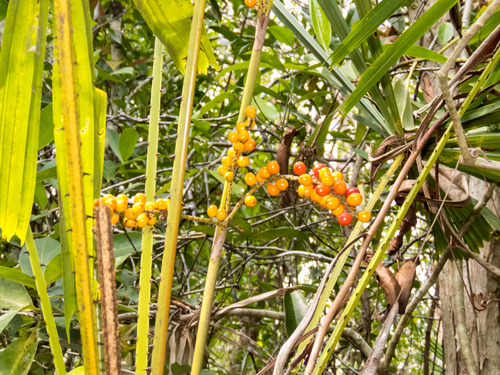 It seems somewhat surprising that Hidari bhawani is considered to be rare (and is certainly rarely seen) when its host plant is so abundant.