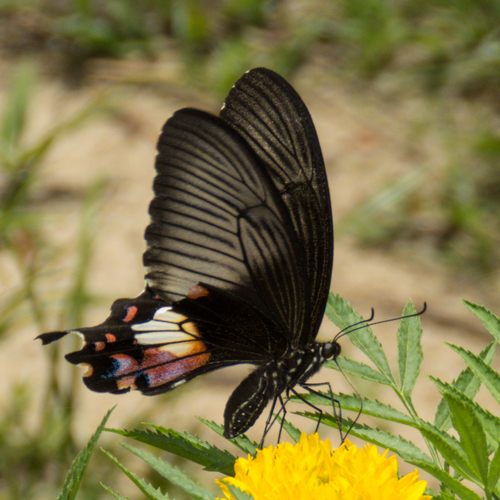 As I did not rear from eggs, but from collected larvae, and I did not capture each moult between larval instars, I need to make some assumptions about the instars I report here. To this end, I am using Islam et al(2017)1 as a reference. They indicate the durations (in days) and sizes (in mm) for each development stage as follows:

The most complete life history I have for this species starts with a larva collected on 6 July 2014. The first and only fixed record I have, in terms of timings in the table above, is a moult was on 8 July. The final instar larva was still around on 27 July. I missed the pre-pupa stage and my next photo is of the pupa on 2 August. My timings are a little short for pupation as the adult emerged on 6 August. Even assuming that the larva began prepation for pupation on 27 July, that still only leaves 10 days for both the pre-pupa and pupa stages. However, the life history on the Butterflies of Singapore site2 reports 1 day for pre-pupa and 8 days for pupa stages, respectively, so that seems to fit. Working backwards from an assumed last day as a larva on 27 July to the first recorded moult on 8 July, gives a period of 19 days. Based on the timings, this would suggest that the larva I collected was in the 1st instar. However, I do not remember collecting such a small larva and the photo suggests that it is longer than 5mm. If I assume the collected larva was in the 2nd instar, then the newly moulted larva on 8 July would have been the start of the 3rd instar, leaving 19 days for the 3rd, 4th and 5th instars combined. This is significantly higher than the maximum duration (16 days). The upshot of all that is that what I have recorded doesn't seem to fit. Either I started with a 1st instar larva that is much smaller than it seems in the photo, or the period from 3rd instar to pupation was incredibly long. As a result, I will show the fourth and fifth instars as definite and include other photos of earlier instars, with dates.

I have included photos of the pre-pupa stage but from a different larva. 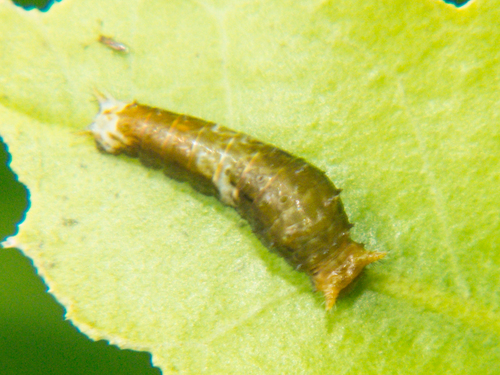 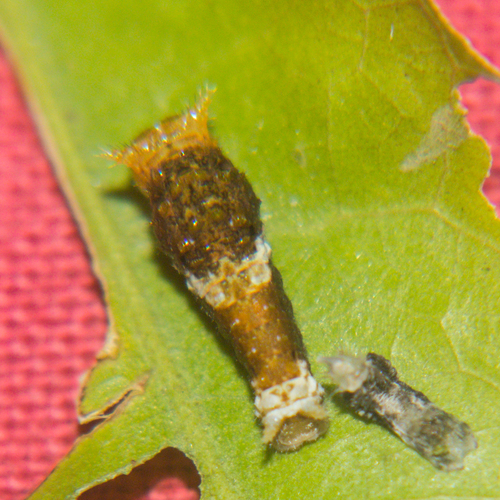 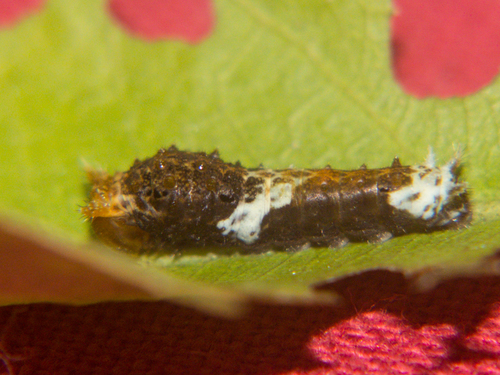 14 July (10:09): Here, it showing its osmeterium, which is a defensive organ that somewhat resembles the forked tongue of a snake, so can startle larger predators (e.g. birds and lizards). It also emits a foul smell that can repel smaller predators (e.g. ants and spiders). 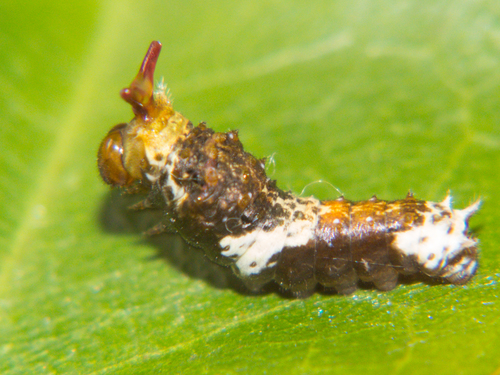 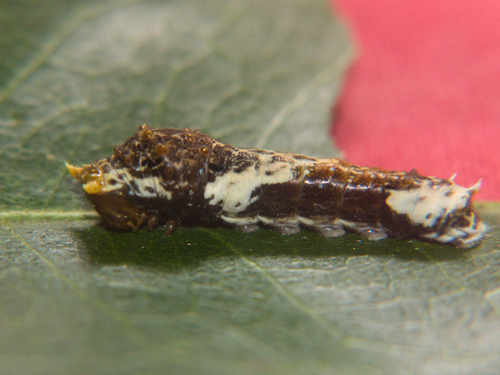 21 July (09:53): This was definitely the 4th instar because it was taken only 2 days before my first fifth (and final) instar image of this larva. 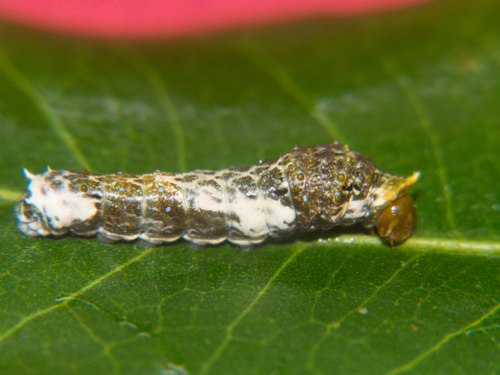 The 5th instar is completely different. It no longer resembles bird droppings but, instead, takes on the colouration of the foliage on which it feeds. 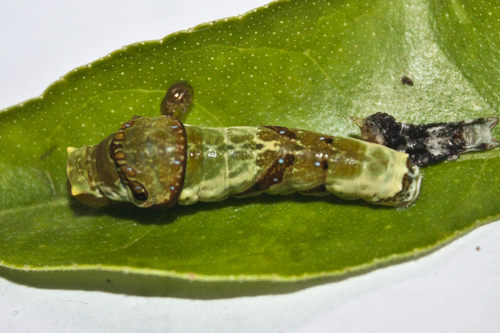 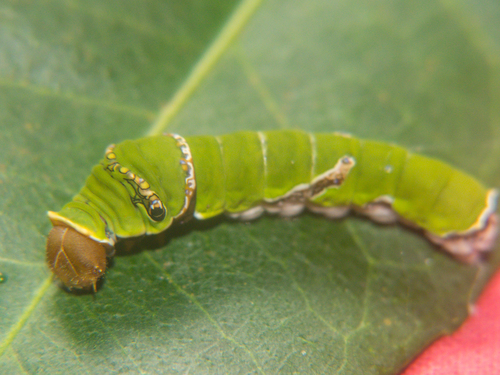 The first photo shows a newly moulted 5th instar larva and is actually from a different larva to the other photos. The second is part of the main series, and was taken on 23 July (08:45).

These photos of the pre-pupa were taken 6.5 hours apart. They are from a different larva to that in the main time line above. 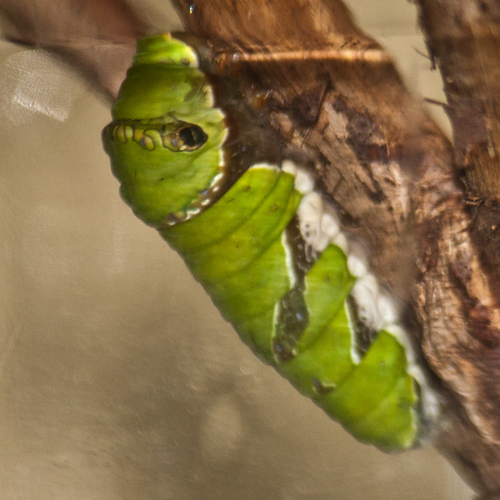 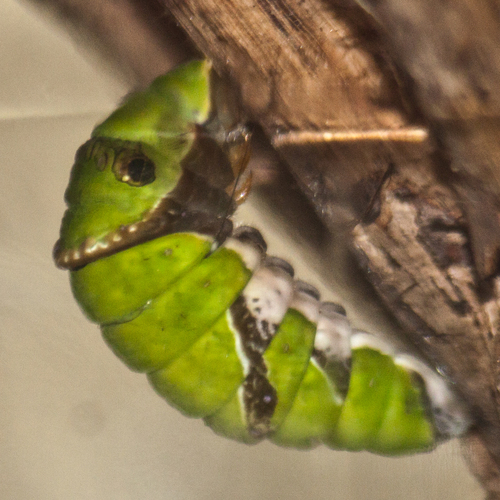 The colour of the pupa seems to vary depending on to what it has been attached. 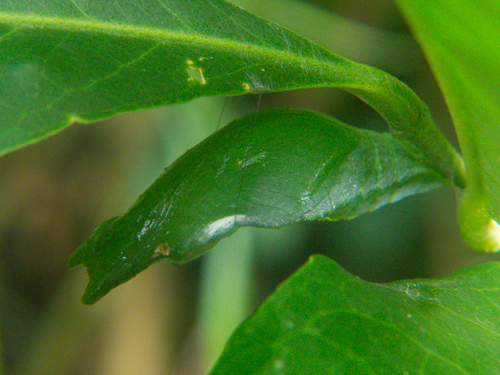 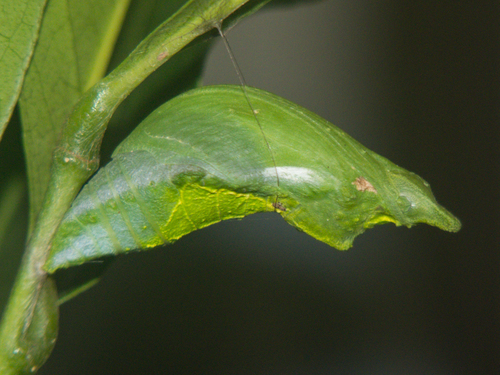 The first photo was taken in nature and shows a dark green pupa on a dark green plant. The second was from the main series and was taken on 02 Aug (17:28). It matches the yellow-green of the plant. 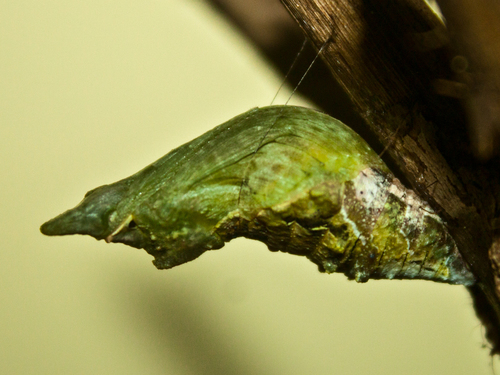 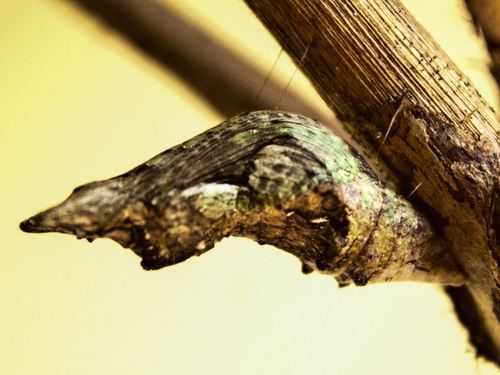 These photos are of the same pupa as each other, taken a little under 12 hours apart. The first was taken 14 hours after the second pre-pupa photo. The second pupa photo shows that it turned brown to match the stick on which it was attached. 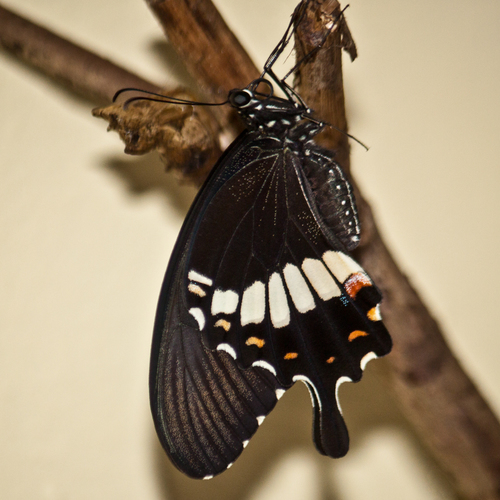 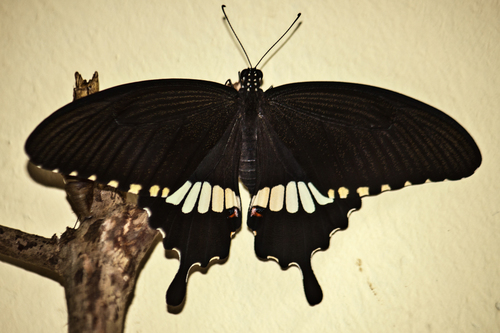 The adults of this species are sexually dimorphic. The image at the top of this article, shows the female.

The main series in this article was from a larva collected on what I think is a Micromelum sp.. The other was collected from Citrus ÃƒÆ’Ã†â€™ÃƒÂ¢Ã¢â€šÂ¬Ã¢â‚¬Â aurantiifolia (Key Lime). The Natural History Museum (UK) has a long list of host plants for this species.