I am Gerard Chartier (a.k.a. Gee). I am an Englishman, who has been living in Cambodia since 2009, and I am a very keen (some might say, “obsessed”) amateur naturalist. I have been a software developer since 1990, working in various roles and with various technologies. I have no academic qualifications in either field, having studied sport science for my degree. Since 2013, I have been married to Onn Theary, who struggles to understand my passion for nature, in particular how much time and effort I invest, for no income. I have three grown-up sons (from a previous marriage) and three grandchildren (and another on the way), all living in England.

I have always had an interest in nature but it did not really develop until I came to Cambodia and was so immersed in nature at Rainbow Lodge (an eco-lodge in Tatai Commune, Koh Kong Province), where I lived for eight years. I was first attracted by the beautiful butterflies here and started photographing them. My curiosity was piqued and I wanted to find out what species they all are. That was the start of my efforts to learn about and document as much of the nature around here as I can. I have been doing so ever since. As I became more and more focused on nature, so my role at Rainbow Lodge changed to be almost entirely guiding nature focused tours with customers. In 2017, I set up my own nature tour company, Gee's Nature Tours, but still carried out the large majority of tours with Rainbow Lodge customers.

When I first started, I made many identification mistakes without even realising. But, with the help of others (see acknowledgements) I started to learn the subtle differences between many species, particularly butterfiles. It was a definite case of, "The more you know, the more you realise you don't know" [often attributed to Aristotle or Socrates].

Another problem was (and sometimes still is) terminology. It still amazes me how much terminology one needs to know, particularly if one wants to understand and use identification keys. Taking entomology as an example, each different order seems to bring with it a whole host of different terms to learn. Even within orders, the terminology can differ. For example, the terms used to define the areas and veins of butterfly wings are quite different to those used for the wings of moths, even though, technically speaking, butterflies are a subset of moths. Sometimes, I think that, with my lack of zoological qualifications, I am a little too ambitious to try to use identification keys but I have always enjoyed puzzle-solving, and that is how I treat the task of trying to use a key to identify something new. There is a great sense of achievement when it leads to a successful ID. 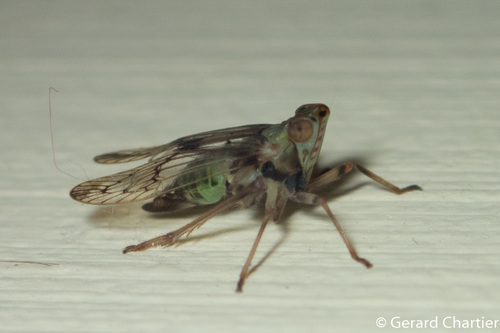 I have also learned that, with many taxa, it is not possible to attain a species level ID from photos alone because the differentiating features between species are internal (usually in the genitalia) and dissection and examination under a microscope are required. To be honest, I believe that, in most case, there are visible differences but that we are not able to pick them out. Maybe, AI pattern recognition software could help here but that would require many correctly identified images on which to train. I have collected specimens to help with scientific study. At first, I was totally against the idea but was persuaded of the benefits by multiple scientists. I even have one species named after me: Sogana chartieri Constant, 2019.

In terms of recording and making my findings public, I first started doing so on the original, and now long superseded, Rainbow Lodge website. I then started my own, also no longer running, website, tataiwildlife.info. When I started Gee's Nature Tours, I set up a separate website for that. I found that I could not afford the time to maintain two sites, so I moved all of my wildlife observations onto geenature.com, and closed down tataiwildlife.info. By that stage, I was managing my photos in Adobe Lightroom, and publishing them to my Flickr account. As I was using WordPress for geenature.com, I decided to write a WordPress plugin that used my keywords (exported from Lightroom) to create a post for each taxon and use the Flickr API to fetch matching photos.

Unfortunately, 2020 was a very bad year for me, as it was for most people, and I had to close my nature tours business and move to Phnom Penh at the start of 2021 to start working back in software development. I have been too busy since then to add many observations to iNaturalist but, hopefully, I can get back to that soon.

When I graduated in 1989, with a 2:1 BSc in Sport Science, my first child was already on the way, and there were almost no jobs for newly graduated sport scientists. I was surprised to find that some companies were recruiting graduates from any degree subject into information systems (IS) training programmes. I joined one with British Steel in 1990 and have been working in IS ever since. I was with British Steel for 6½ years. I was then with Oracle Consulting for 2 years and freelance for 2 years, before joining Science Systems, who renamed to SciSys, bought a company called Business Collaborator (BC), which I tansferred to, when SciSys closed our regional office. I was with BC until I moved to Cambodia. Overlapping with my time at BC and during my time in Cambodia, my father and I had a software company called Convergent Software. Sadly, that is now closed.

During my IS career, I have worked in many roles in all aspects of the software development life cycle. I have also used multiple programming languages and database platforms. I always found it odd that I had great difficuly learning foreign languages (my worst subjects at school were French and German) but I seemed to have no problem learning new programming languages. My time in Cambodia has taught me that this is simply down to usage. I wouldn't say I am fluent in Khmer (by far the most prevalent language in Cambodia) but I can usually get by.

Even when I was living surrounded by jungle, I still kept dabbling in IS, with Convergent Software and also with development of the orginal website for Rainbow Lodge and then my own sites of tataiwildlife.info (now deceased) and this site. With Convergent software, I was developing software in Java and C# and the website with ASP.net. All the other sites, have been based on PHP. This site was on a WordPress platform with a plugin I developed to take a keyword file (exported from Adobe Lightroom) and generate a post of a taxon custom post type (CPT) for each keyword, with a photo gallery populated with photos from my Flickr account, brought in via the Flickr search API. I also had a checklist CPT to allow me to easily build checklists based on the taxon posts. When I started switching my focus from Flickr to iNaturalist, I redeveloped the plugin to use the iNaturalist API to fetch my observation data overnight and create observation posts (a third CPT) and taxa and pre-generate HTML for the checklist posts.

In April 2021, I decided that I fancied learning about the Laravel framework, and that, in order to learn it properly, I would redevelop this site to use Laravel. This was partly driven by curiosity, partly by some issues I was having with my site on WordPress and partly thinking about my career. After I had learned a little about Laravel, I decided to build this site entirely using the TALL stack (for more details see my page on the technology of this site). It has been an interesting experience, with some difficulties but many more, "I can't believe how easy that was" moments. I would now be very happy doing further developments using the TALL stack.

So, despite thinking I was leaving IS behind when I moved to the jungle, I have never actually done so. Also, after times of saying I hate software development and never want to go back to it, I have continually taken myself back into it. My eldest son said to me, "You love it really, just admit it!". I think he was right. In some ways there are some parallels to the identification of species. There is often much frustration but also a great feeling of satisfaction when you build something that works.